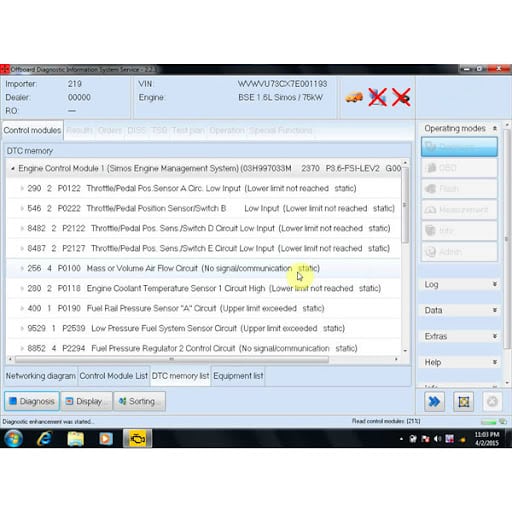 We existed with this Skoda roomster to identify and rectify an intermittent fault on from another Ipswich based Volkswagen, Audi specialist.

The vehicle arrived on a recovery truck after breaking down en route to us and wouldn’t start.

Preliminary description of the fault was holding back bad running and eliminating but would restart along with a quick idle speed.

The lorry had actually apparently been revealing a fault for the throttle pedal and had actually been fitted with a secondhand unit. Initial investigation showed that the injectors were not being set off

On the PD diesel engine the cranking speed requires to be above 270-280 rpm to trigger the injectors this lorry was extremely sluggish at 230 rpm.

After some initial testing the stater would not turn the engine over at all and just clicked.

The stater was changed and the cranking speed rechecked it was now a healthy 300 rpm and the injectors were being operated but it still wouldn’t begin.

We next moved onto the fuel system and a pressure gauge was installed on the main fuel line from the tank.

After extended cranking the vehicle started however it was observed that the gauge was revealing an unfavorable pressure.

This was certainly a fault as the car is fitted with an electrical pump in the tank and a normal reading is 0.5 to 1.0 bar pressure.

The negative pressure was being produced by the engine driven tandem pump drawing fuel through the fuel filter all the way back to the tank.

The rear seat was raised and the pump feed and ground were checked and load checked all tests were good.

The in tank pump was gotten rid of and bench tested and verified as a failure.

A new in tank pump unit was installed and the vehicle fuel pressure was re check and revealed a healthy 1.0 bar positive pressure this treated the periodic cutting out fault.

All that was left was to investigate the high idle speed which was sitting at a continuous 1200 rpm.

There were no faults stored in the engine management system however live information was revealing a pedal sensor reading at 8%.

The old throttle pedal remained in the vehicle this was re-installed and the reading dropped but was still high at 5%.

If the pedal was pulled up the reading would drop to no and the idle speed was appropriate, we quickly found that.

Conclusion abnormally there were 3 different faults with this vehicle and using second hand parts made the scenario worse.

A systematic technique with a good system knowledge led us to a correct quick diagnoses of the following. Defective starter motor, Vacuum in the fuel line from the tank, Faulty in tank fuel pump.

This car was fixed using our extensive Volkswagen, Audi and Skoda knowledge as well as having full Skoda, Volkswagen and Audi main dealer diagnostics to assist in locating the slightly harder faults by producing a test plan so as we could see the live vehicle data from the engine ECU and a number of other modules to ensure a full and accurate diagnosis